We have a choice 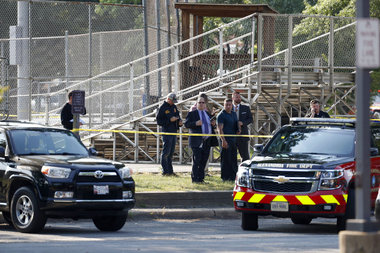 This week, Congressman Steve Scalise was shot.  The apparent motive was that he is a Republican, though that is still being sorted out.  It is perhaps a reflection of where political discourse is in our country.  More and more, we view people of opposing political beliefs not as people of good will with whom we can disagree, but as enemies to be vanquished.

This is not to say that anyone, and certainly not anyone with a certain set of political beliefs, is to blame.  Blame is a concept for assigning fault, and there is unfortunately plenty of fault to go around for our political climate.  Rather, it is a suggestion that we have lost our basic humanity in this country when people think violence is an appropriate response to political differences.  This is not a reflection of our politics, but of our souls.

I know very little about Congressman Scalise.  I had never heard of him before this shooting.  I've heard things since that would lead me to believe he is not somebody I would vote for, but most of that is from sources that probably don't like him very much to begin with, so I have little basis to form an opinion.  In any event, it is immaterial.  Whatever else he might be, Congressman Scalise is a child of God, one for whom Christ died.  Because he is from Louisiana and of Italian descent, one might presume he is a Catholic, though I do not know that.  It matters not, because even if he were not a Christian at all, he is still a child of God and one for whom Christ died.

After Osama Bin Laden was killed, I wrote this:


So it is that I struggle to keep the death of this man in its proper place. In the end, all we can rightly do is commend his soul to God. I will one day face death, and looking in the mirror I have no basis to be confident I will fare better than he. My confidence is in Christ. Would that Osama bin Laden had that same confidence. Would that he had more time to repent. May God have mercy on his soul, and ours. It's later than we think.

If I can say that of Osama Bin Laden, surely I can say it of Congressman Scalise.  Or of anyone else whose politics I may disagree with, even vehemently.

As Christians, we believe that all are redeemed by Christ.  Some do not have benefit of that redemption, for sure.  And that is tragic.  Yet, we are called by our Lord to love our enemies.  We pray in the Service of Compline during Great Lent "for those who love us and those who hate us."  During the Paschal doxosticon we sing "for the sake of the resurrection, let us forgive all things to those who hate us."  Why?  Because Christ died for those who hated Him.  He said "Father, forgive them, for they know not what they do."

Surely if this is true, we can love those who hold policy views we disagree with, even vehemently.

I recall shortly after President Trump was elected, when I was just beginning to learn about the so-called "alt-right," reading a story about Derek Black, whose father founded Stormfront, a leading alt-right website, and as best I can tell (though I dare not visit to confirm for myself) a white supremacist group.  Derek went to school at New College of Florida.  There, his white nationalist views began to gain some notoriety.  He intended to change the students there.  They ended up changing him.  But the real story is how that happened.  You can read about it here.

Derek left for a time to study abroad.  When he returned, he had basically been "outed." He read the online discourse about him, and planned to use it as fodder for an upcoming white nationalist conference.  Then, he got a text message.  "What are you doing Friday night?"

The text came from an acquaintance, an Orthodox Jew, who pondered whether it was a good idea to invite Derek over.

Matthew decided his best chance to affect Derek’s thinking was not to ignore him or confront him, but simply to include him. “Maybe he’d never spent time with a Jewish person before,” Matthew remembered thinking.


Before long, through interaction with Matthew and his friends, Derek's views began to change.  To the point that he eventually wrote this:


After a great deal of thought since then, I have resolved that it is in the best interests of everyone involved to be honest about my slow but steady disaffiliation from white nationalism. I can’t support a movement that tells me I can’t be a friend to whomever I wish or that other people’s races require me to think of them in a certain way or be suspicious at their advancements.

The things I have said as well as my actions have been harmful to people of color, people of Jewish descent, activists striving for opportunity and fairness for all. I am sorry for the damage done.

My point is not to identify Derek Black's former views, much less Osama Bin Laden's, with Congressman Scalise's views or political stances.  That would be slanderous.  As I said, I don't know enough about Congressman Scalise to have any but the most poorly considered opinion about his personal or political views.  My point is simply this -- if Derek Black can change, simply by being included and loved, we all can change.  And that, really, should be our hope in this great country.

One of the things that was said in the thousands of comments about Derek Black at New College of Florida was this:


I just want this guy to die a painful death along with his entire family. Is that too much to ask?


Who’s clever enough to think of something we can do to change this guy’s mind?

We have a choice.  Which of these people do we wish to be?
Posted by David Garner at 11:30 AM