Martyrdom of St. John the Forerunner 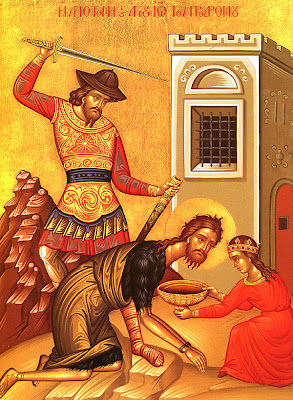 Although the Forerunner was beheaded in the Spring, around the time of the Passover, this feast was fixed for August, when a church was dedicated in its honor.
The accounts about the martyrdom of John the Baptist are provided by Ss. Matthew (Mt.14:1-12) and Mark (Mark 6:14-29). It was in the 32nd year after the Birth of Christ.


The memory of the righteous is celebrated with hymns of praise,
But the Lord¹s testimony is sufficient for you, O Forerunner.
You were shown in truth to be the most honorable of the prophets,
For you were deemed worthy to baptize in the streams of the Jordan Him whom they foretold.
Therefore, having suffered for the truth with joy,
You proclaimed to those in hell God who appeared in the flesh,
Who takes away the sin of the world, and grants us great mercy.

The glorious beheading of the Forerunner,
Became an act of divine dispensation,
For he preached to those in hell the coming of the Savior.
Let Herodias lament, for she entreated lawless murder,
Loving not the law of God, nor eternal life,
But that which is false and temporal.

from http://orthodoxwiki.org/Beheading_of_St._John_the_Forerunner
Posted by David Garner at 8:29 AM No comments:


"Allow me to offer a little image to illustrate this. We find, in nature, two different kinds of skeletons that provide structure for creatures - the exoskeleton and the endoskeleton. The exoskeleton like the carapace of an ant or a beetle - it is on the outside (hence "exo-") and contains within itself the essence of the creature. The endoskeleton is like the skeleton of a dog or a man - it is on the inside (hence - "endo") and the structures that are the essence of the creature are hung upon it - everything in its place and a place for everything.

The Western confessions tend to have a dogmatic endoskeleton - certain a-priori assumptions (dogmas) upon which every doctrine, belief and practice is hung. There is a very particular place for everything in the overall organization and structure and if something is out of place then it either doesn't belong or it creates chaos.

The Orthodox Faith tends more towards a dogmatic exoskeleton - defining the outer limits of its essence, but not mandating the inner structure. Everything that is "inside" is part of the teaching of the Church and only those things that are "outside" are excluded. As a result there plenty of room for doctrines and practices that are conflicting to coexist "inside" the Church without causing chaos or cancelling each other out. Our inner unity is defined by the exoskeleton of dogmatic pronouncements without the rigid and defined structure mandated by an endoskeleton (and this allows the Orthodox Church to be both truly One and truly Catholic since it allows the flexibility to address all people in all places in all times without compromising or breaking the structure.)"

-- Archpriest David Moser, from the Orthodox-Convert e-mail discussion list
Posted by David Garner at 10:44 AM No comments:

The Transfiguration of our Lord is one of the 12 Great Feasts of the Orthodox calendar.  The story is fascinating, but familiar to most Christians, so I will refrain from repeating it here.  I would note, however, something that has always struck me about the Gospel accounts of the Transfiguration.

Much is made of the various distinctions and harmonies between the three Gospel accounts of the Transfiguration -- those of St. Matthew, St. Mark and St. Luke.  What is not often mentioned is St. John, who was the only Evangelist to witness the Transfiguration, did not write about the event at all in his Gospel.  Of course, as students of the Scriptures know, St. John dealt with the Transfiguration in his Revelation.

Then I turned to see the voice that spoke with me. And having turned I saw seven golden lampstands, and in the midst of the seven lampstands One like the Son of Man, clothed with a garment down to the feet and girded about the chest with a golden band. His head and hair were white like wool, as white as snow, and His eyes like a flame of fire; His feet were like fine brass, as if refined in a furnace, and His voice as the sound of many waters; He had in His right hand seven stars, out of His mouth went a sharp two-edged sword, and His countenance was like the sun shining in its strength. And when I saw Him, I fell at His feet as dead. But He laid His right hand on me, saying to me, 'Do not be afraid; I am the First and the Last. I am He who lives, and was dead, and behold, I am alive forevermore. Amen. And I have the keys of Hades and of Death.'


St. John could easily have written about this in his Gospel account, but he chose to deal with it in Revelation.  In light of the fact that St. John was the only eyewitness to write a Gospel account, I find this fascinating.  Skeptics might assert that since the only eyewitness to write an account failed to mention the Transfiguration, it must be fraudulent.  But this ignores that St. John deals with the transfigured (but now resurrected) Christ in Revelation.  As if his purpose in writing was to show the Transfiguration in eschatological terms rather than mere historical terms.  To my mind, this magnifies rather than reduces the value of the Transfiguration account.  It reveals -- from the pen of one who was there -- its ultimate purpose and its real lesson for us.

Orthodox Christianity, lived out, ultimately comes down to the Sacramental life.  And the Sacramental life ultimately comes back to the Incarnation.  The beauty of the Transfiguration is not merely what happened on Mount Tabor, but rather what it means for us.  What it gives to us.  It is not merely that Christ is the Son of God, or that He was glorified once on a mountaintop.  It is that He is "He Who lives, and was dead, and behold [is] alive forevermore."  That He "holds the keys of Hades and of Death."  And this good news is summed up in Christ's words to St. John -- "do not be afraid."  The beauty of the Transfiguration is that Christ has defeated Death and Hades, that we may have hope of eternal life.  That we might become by Grace what He is by nature.  St. John did not write about this in His Gospel directly.  But he did write about it in a different setting.  And I would argue, to greater effect.


You were Transfigured on the Mount, O Christ God,
Revealing Your glory to Your disciples as far as they could bear it.
Let Your everlasting Light shine upon us sinners!
Through the prayers of the Theotokos, O Giver of Light, glory to You!


On the Mountain You were Transfigured, O Christ God,
And Your disciples beheld Your glory as far as they could see it;
So that when they would behold You crucified,
They would understand that Your suffering was voluntary,
And would proclaim to the world,
That You are truly the Radiance of the Father!

Posted by David Garner at 7:43 PM No comments: