Another stop in my ever-evolving tour of Orthodox Churches around the southeast... 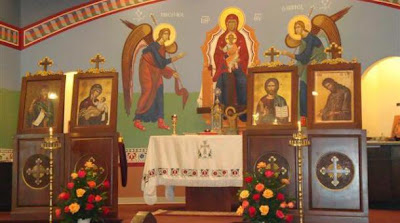 I had occasion yesterday to visit St. Philothea Orthodox Church in Athens, Georgia.  Thanks to Father Anthony and my friend Rose Lieffring, along with the rest of the parish, for being so welcoming!

I love Greek Churches.  I really do.  The beauty of liturgical Greek combined with the hospitality of the people who comprise such parishes is unparalleled.  This was no different.  The food isn't bad either, but unfortunately I was unable to stay for lunch.

I arrived blessedly in time for Orthros and that and the Liturgy were both beautiful.  As I've noted before, different from what we do each Sunday, but utterly the same.  I've written before that the scandal of jurisdictionalism has a positive side effect, in that we can see different ethnic and jurisdictional perspectives on the One Church.  While I pray that scandal is remedied, I also hope (and believe) that it will be remedied while leaving these varied ethnic expressions of the Faith intact.  While visiting a parish is not like being home, and while the slight differences in wording of the Creed and the pre-communion prayers and other portions of the Liturgy are a challenge for a visitor, it is great comfort knowing that the same Faith is preserved.  Father Anthony's homily was outstanding, dealing of course with the Parable of the Prodigal Son.  He did a wonderful job articulating the great comfort we have in knowing that we cannot earn heaven, that the prodigal was celebrated by his father precisely because he came home after having been lost, and of warning us not to adopt the attitude of the brother who chose to criticize his father's welcoming of his lost brother.  He also did a fantastic job of articulating how we do not make a radical distinction between faith and works, instead relying upon grace for both.

I miss my home parish when I am away.  But what great comfort to know that regardless of where I go, the ancient Faith is usually accessible.  Thanks be to God for that.
Posted by David Garner at 7:29 AM No comments:

Gospel of righteousness means justification by works? From the Energetic Procession blog....

The folks over at Energetic Procession have hit another home run with this post entitled "Gospel of Righteousness Means Justification By Works?"

Thus, it is impossible to be justified by our works. Obedience to the Law in itself is incapable of saving us. Rather to transcend our condition we must be helped by God, He must give us to share in His energies that we may live as He does. That is we are saved by the grace of God, which sets us free from our limits to participate in His free eternal life. We are not saved by grace to escape from works but to participate in eternal works that transcend our own works. Why does not God just do this for us all and why must we still obey? Because to participate in the life of God means that we must both be unique persons and free. God cannot make us good only of Himself else it would deny our freedom and unique personhood and we would no longer be the ones participating nor would we be living as He lives freely. This is why we must have faith because in this we express our free will to live as God lives. Through faith we own God’s life as our life by obedience and doing His will. This means that we truly share in His life freely of our own will and living His life with Him. He is the only one who is truly free and only by sharing in His freedom, by uniting to His will through obedience, do we also become truly free.

Posted by David Garner at 6:45 PM No comments: