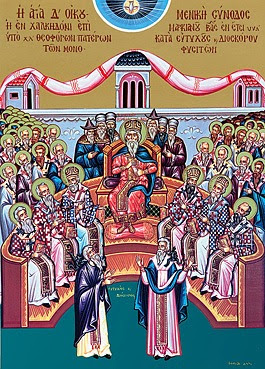 "On this Sunday, in the Holy Orthodox Church, we commemorate the 630 holy and God-bearing Fathers of the Fourth Ecumenical Council, which convened in Chalcedon in 451 against the Monophysites.

The Holy Fathers were, once again, concerned with the nature of Jesus Christ. The false teaching arose that Christ’s human nature (considered by heretics as less perfect) dissolved itself in His divine nature (considered by heretics as more perfect): like a cube of sugar in a parcel of water. Thus, in that scenario, Christ had only one nature, the Divine. These false preachers were called Monophysites (“mono”, meaning “one” and “physis”, meaning “nature”), and they were led by Eutyches and Dioscorus. Monophysitism overemphasized the divine nature of Christ, at the expense of the human. The Fourth Ecumenical Council condemned Monophysitism and proclaimed that Christ has two complete natures: the divine and the human, as defined by previous Councils. These two natures function as equally perfect, without confusion, and are neither divided nor separate. The Fathers declared that at no time did they undergo any change.

By the intercessions of Thy Saints, O Christ God, have mercy upon us. Amen."

-- from the Archdiocese of Los Angeles and the West:  http://www.antiochianladiocese.org/news_110709_1.html
Posted by David Garner at 4:56 PM