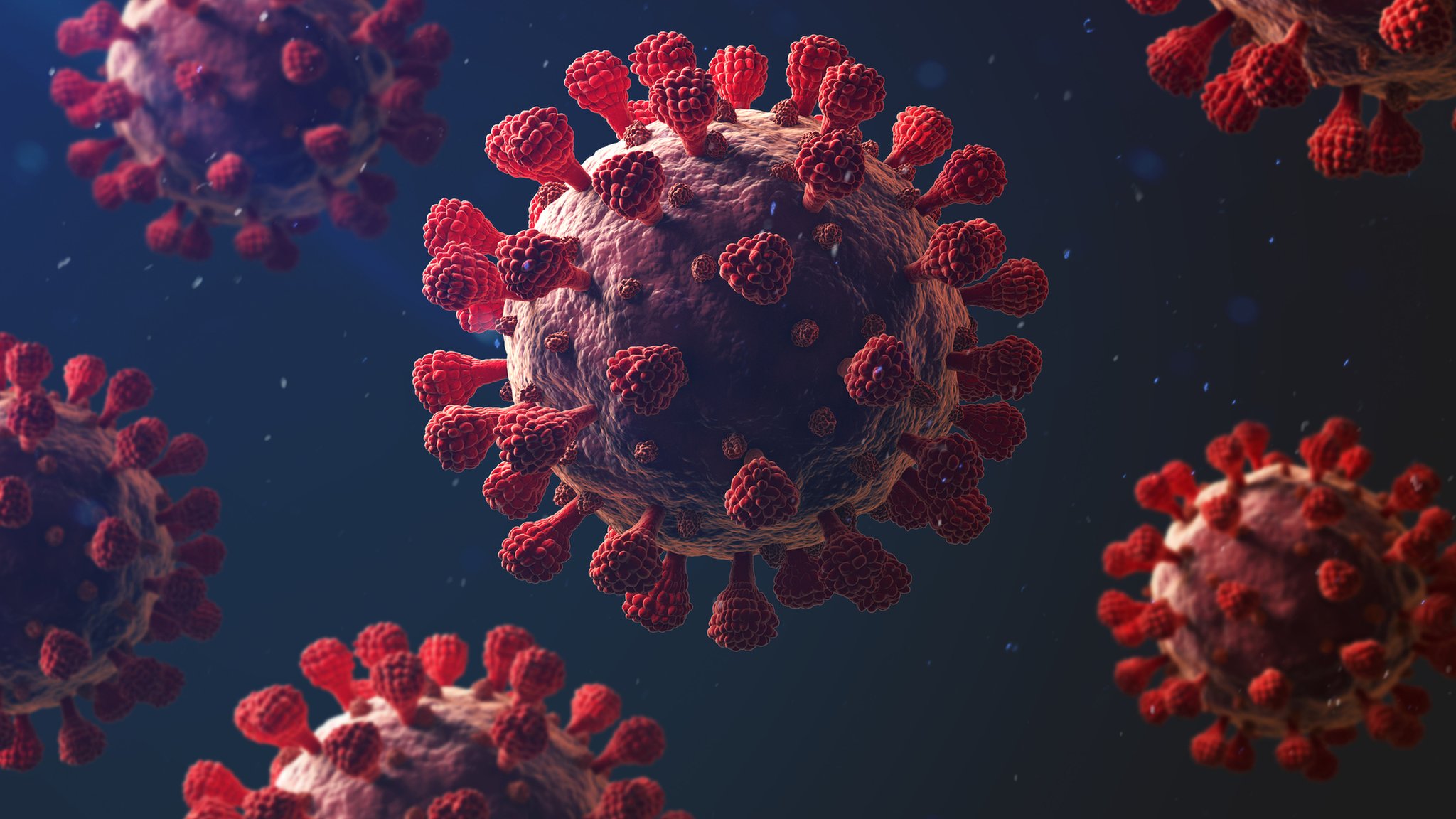 This little speck has caused untold damage to our world.  The damage I write about today, however, is the damage it has done to our souls.  I still frequent a handful of internet discussion boards that discuss theology and theological matters.  On one in particular, I was saddened to see the politics of COVID override Christian love of neighbor.  In this case, it dealt with those who were fearful of their unmasked and unvaccinated neighbors.  Such people were called "crazed," and at least one person said he "lacked sympathy" for anyone who would not get vaccinated. Today, in a comment that caused me to reconsider my hesitance to publish this, one of them said that healthcare workers' lives were "endangered" by the unvaccinated.

I also, in contraindication of the health of my own soul, still frequent social media sites.  On one of those (likely the one you received this link from), another person suggested that anyone who vaccinates their minor child is guilty of "child abuse."  I'll elaborate on my thoughts about both downstream.  I'll say at the outset, this is not intended to be a condemnation of the people who took these positions.  It is, rather, a case study in how we as Christians actually deal with each other (all involved are professing and practicing Christians), and an encouragement as to how we should.  The people who said these things are not mentioned for that reason.  It isn't about them, it's about us and how we treat one another.

Part of the problem, no doubt, is the general polarization and ugliness of our politics.  We are not a tolerant people.  We were not a tolerant people when the self-styled champions of what they called "tolerance" (but which was actually authoritarian thought policing) still pretended to believe in it.  So it is to be expected, I suppose, that it is not enough to disagree.  We must also tear down, ridicule, lampoon, demean, and seek to control and conform.  We spring to hyperbole as if it were the most persuasive way to discourse -- there is a reason this moment in time has required the coining of Godwin's Law.  We blame social media for this, but the truth is it is who we are, what we allow ourselves to be.  But the problem also stems from fear and a desire to control others, and therefore the natural outcome of man's fall into sin.  These are the points I want to drill down on.

We know from the Scriptures and the Church Fathers that the problem of man is the problem of mortality.  Stripped bare of our communion with God, and therefore imprisoned in this body of death, we turn inward, and seek to protect ourselves first.  We seek to do so often by attempting to control the behavior of others.  Lacking trust in God and love of neighbor, we put our needs above our neighbor and seek to survive.  This is why, some Fathers suggest, all sins ultimately trace back to pride and love of self.  It is why the great ascetics, and monastics like St. John Climacus, make such a great deal of denying the self.  It is why we fast.  It is why we do prostrations.  We teach ourselves to deny the self and live for God and neighbor.

So returning to these two objections in this light.  The first, that those who will not get vaccinated (or wear masks if they are vaccinated) are in essence bad people, is obviously about fear and control.  One person who took that approach suggested that absent a doctor's excuse, anyone who refuses to be vaccinated should be forbidden from going in public spaces.  Forbidden from holding certain jobs.  Forbidden from using public transportation.  (Whether these are good or bad policy provisions is beyond the scope of my point -- I am speaking about how we as Christians view our neighbor).  When pressed, he said they should not be allowed to use the public accommodates he uses.  Since he was the fearful one, I asked why he did not stay home.  I did not receive an answer.  Today, as noted, this same person suggested that the mere presence of the unvaccinated threatens the lives of healthcare workers.  Even though healthcare workers were the very first in this country to receive the vaccines, this person thinks unvaccinated people are a threat to their lives when they come to the hospital for treatment.  Who is the real vaccine skeptic here?  Most of the people in the discussion -- even those of us opposed to vaccine mandates, but still in favor of vaccine promotion and encouragement -- at least believe the vaccines work.

This person is vaccinated, as am I, and as was, best I was able to tell, everyone else in the discussion. Yet his fear of being around those who are unvaccinated was practically palpable, and it was highlighted best in the comment today.  This fear and skepticism caused him to suggest his neighbor should essentially be imprisoned in his own home for the crime of endangering people who took steps to mitigate the danger, as if those steps are insufficient.  It didn't matter that the unvaccinated neighbor actually poses very little real public health threat at the moment, much less a threat to this man in particular or vaccinated healthcare workers.  No, he thought everyone should get a vaccine, and therefore he was willing to take away the freedom of his neighbor in order that he might travel freely and without his own irrational fear of illness or death.  He and a couple of others said expressly they could conceive of no good reason why anyone might want to avoid being the first in line to take a vaccine that is not FDA approved, and the long-term efficacy of which is still undetermined.  I can articulate many good reasons why I got the vaccine as soon as it was available (and I do so below).  But these men could think of no reasons why anyone else might have taken a different approach than they, and I, did.  For those of you who are similarly unable to conceive of why anyone would not want to get a vaccine, I offer this:

At any rate, lacking trust in God and love for neighbor, these folks are willing to harm their neighbors to make themselves feel better.

On the other side of the aisle, so to speak, is the man who proclaimed it "child abuse" to vaccinate minor children.  He also commented recently, demonstrating his pride that he would not be getting vaccinated.  The reasoning is sound enough for him to make that decision for himself and his kids -- minor children are generally unaffected by the COVID virus and therefore for him the risks of the vaccine outweigh the risks of the virus.  If he doesn't want the vaccine for a variety of good reasons, as noted above, that's certainly rational, even if I would (and did) disagree.  So far, so good.

For our family, I disagreed for several reasons.  First, I don't want my children to be a danger to others.  It was love of neighbor that prompted me to get the vaccine myself, and to encourage my wife and oldest child to get it, and that same love prompts me to encourage my youngest two to go now that they are able (both received their first dose of Pfizer yesterday and are doing well).  I understand there are risks associated with this vaccine, and others, but I also understand that the best way to defeat the virus, best we know, is to have more people inoculated.  It will not go away, we understand that.  But being able to fight it off will return us to a post-pandemic world with less sickness, less death, and less pain than simply waiting it out and hoping enough of our loved ones survive to obtain herd immunity.  Second, the newer COVID variants, especially the currently prevalent Delta variant, affect younger people differently than the initial outbreak.  So we don't really know that minors are unaffected by mutations of the COVID-19 virus.  That's my reasoning, and it is at worst equally sound.

Yet, despite the fact that my children are not his children, not his to raise, and not his to influence, this person decided to announce publicly that I am abusing them by my decision to vaccinate.  No, he did not direct those words at me personally.  Rather, he directed them at everyone thoughtlessly (I do not think he was being malicious).  Why?  Because he holds a very strong distrust toward the vaccines, and so lacking fear of God and trust in neighbor, he wrote to discredit the vaccines rather than simply trust that others could engage in good decision making without his judgment.  As part of that, he engaged in hyperbole that puts me and others like me on equal footing with people who beat their children or deprive them of food.

I'll repeat here that I don't write this to condemn any of these men.  For one, I am hardly innocent of the charges of fear and desire to control others to conform to my way of thinking.  I'm sure my words could as easily be used in someone else's blog post.  And I am hardly innocent of being judgmental of others and lacking in love for my neighbor, both before and since the word "COVID-19" came into our common lexicon.  I write because both are such good illustrations of how this pandemic illuminates our spiritual illness.  We fear disease of body, and we end up ignoring our diseased souls.  Often, the very basic dignities and freedoms of humanity are the first to go out the window.

St. John Climacus wrote: “The blessed living corpse grows sick at heart when he finds himself acting on his own behalf, and he is frightened by the burden of using his own personal judgment.”  John Climacus, The Ladder of Divine Ascent (New York: The Missionary Society of St. Paul, 1983), 92.  He also wrote: "Repentance goes shopping for humility and is ever distrustful of bodily comfort," and "the penitent stands guilty – but undisgraced.”  Ibid, 121.  Finally, he wrote: “The first stage of blessed patience is to accept dishonor with bitterness and anguish of soul,” while “[t]he perfect stage, if that is attainable, is to think of dishonor as praise.”  Ibid, 149.  As Christians, this is our calling.  We don't often like it, and I for one frequently rebel against it.  But we are called to put ourselves behind our neighbor, most especially in terms of offense, bodily comfort and pride.  We are to put our neighbor's ease ahead of our own.  As noted above, for good or ill, whether I was right or wrong, this is one reason I chose to get vaccinated early.  I knew that in order to ask my family and friends to be vaccinated themselves, I had to step up to the plate.  I knew that if there were any ill effects (there were, all temporary, but all miserable in the short term), I could not ask others to withstand them if I was unwilling to do so myself.  I don't say this to suggest I am such a good person -- again, I judge, I mock, I scorn, I fear.  It is to say I hope I repent, and I hope others do as well.