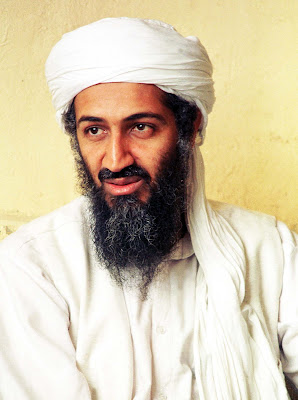 I debated a bit whether to post anything on this.  That is because in large part I'm tempted to write something along the lines of "may he rest in pieces" or some such, and that is not really a healthy expression of what the world just witnessed.  The baser expressions of my own human frailty simply are not appropriate here.

The world suffers -- humanity suffers -- when we lose one of our own.  It really matters not that Osama bin Laden was, by our measure, a despicable human being, a mass murderer who took life without cause and without remorse.  In the end, Osama bin Laden is our brother.  This is the difficult expression of the Christian faith -- that we are all one, for we were all created by One and in His image.  The tragedy is we have lost His likeness, and that is no less true of me than of bin Laden.  One of my former Pastors used to say "the only difference between me and Osama bin Laden in the sight of God is Christ."  This is most certainly true.

We rejoice, in a sense, that his personal reign of terror is ended.  And yet, someone will pick it up again and we will all move on.  We will continue to kill each other and we will continue to pretend that our killing is better than that of whoever it is we killed.  Ultimately, the reason I am uncomfortable with the death of Osama bin Laden is he reminds me of my own sin, the depth of my own sickness and frailty.  In the end, he is a gross hyper-expression of what deep down inside infects all of us.

I told my friend Anastasia over on her excellent blog that I find it striking that I can confess every week "I believe that Thou Art truly the Christ, the Son of the Living God, who didst come into the world to save sinners, of whom I am chief."  And yet at a time like this, my inclination is to be triumphalistic.  I want to say  "God, I thank you, that I am not like the rest of men, extortioners, unrighteous, adulterers, or even like this tax collector," when I should instead say "God, be merciful to me, a sinner!"

Saint Paul, back when he was simply Saul of Tarsus, was a horrible persecutor of Christians, a murderous wretch of a man who severely abused and martyred Christians.  The Patron Saint of our parish, Saint Stephen, became the protomartyr while Saul held his clothing and watched him stoned to death.  This man -- this murderous terrorist -- went on to become one of the greatest Saints in the history of the Church.  So while I am thankful that bin Laden is now unable to do any more harm, I also must remind myself to mourn the fact that he did not have more time to repent.  I also must remind myself that it is not ours to judge.  My own salvation is my concern.  Osama bin Laden's salvation is in the Lord's hands.


So it is that I struggle to keep the death of this man in its proper place.  In the end, all we can rightly do is commend his soul to God.  I will one day face death, and looking in the mirror I have no basis to be confident I will fare better than he.  My confidence is in Christ.  Would that Osama bin Laden had that same confidence.  Would that he had more time to repent.  May God have mercy on his soul, and ours.  It's later than we think.
Posted by David Garner at 6:44 PM

A very sober reflection, brother. It mirrors my own.

Thanks, Ed. I thought it important to write this one before the one I wrote tonight. I needed to be grounded in what we lost before I thanked God for preserving those who kept us from losing even more.